I have just put down my copy of Square Eyes, a new graphic novel by Anna Mill and Luke Jones, my first read of the year.

Set in this vividly realised dystopian future, it tells the story of a tech superstar who suddenly finds herself ‘locked out’ of society: her internet profile has been erased effectively making her invisible (and unable to access even basic services); meanwhile she’s been forced out of her company.

The plot, I’ll admit, is a little thin, but the artwork, oh the artwork! Look at how Anna Mill has rendered this cityscape ⇣ 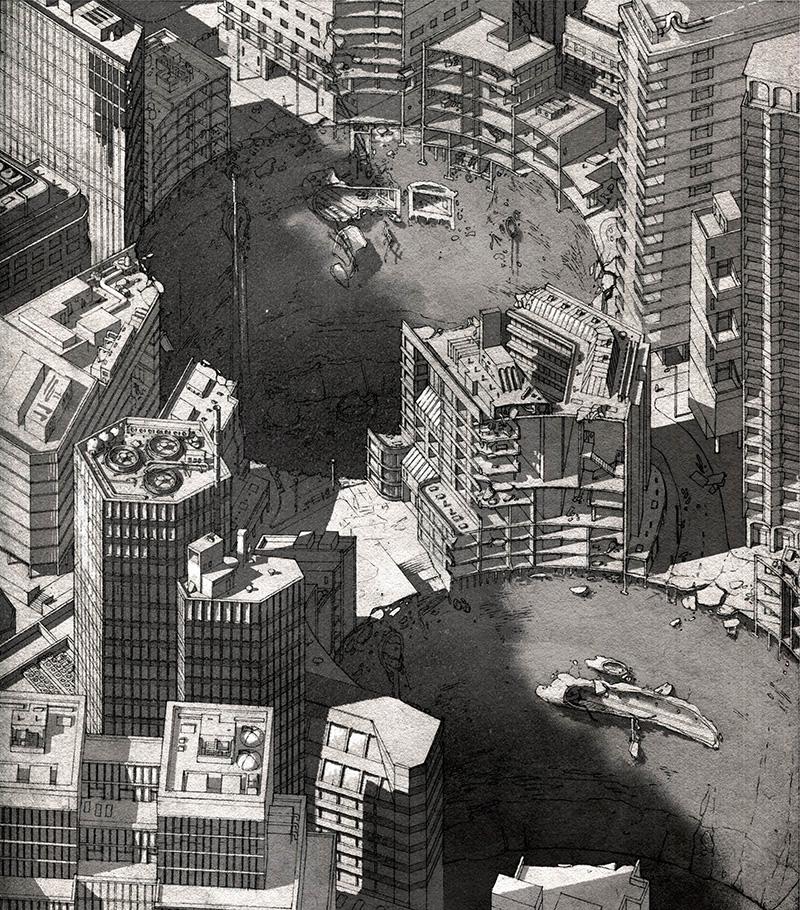 My mind boggles when I think how long it must have taken to intricately pencil and colour this single page, all in pitch-perfect perspective.

You really get the sense that not just the contents of each panel, but the arrangement of them has been really carefully thought out. The story opens with several pages of tiny 5x5 panels, all in extreme closeup. Sometimes a scene is shown entirely from a single character’s point of view; other times, the same space is split across multiple panels.

So I enjoyed “seeing” it, more than I enjoyed “reading” it, if that makes sense.

Now a confession: I discovered graphic novels embarrassingly late in my life, not long before I turned 30. In fact, it wasn’t until I read Scott McCloud’s legendary book Understanding Comics that I finally appreciated their potential.

(It also helped, I think, that I was living in France at the time, a country that has a vibrant culture of bandes dessinées. They have shops that just sell graphic novels, there are so many of them published there!)

First I was fascinated by what they could teach me about filmmaking. Scott McCloud’s definition of comics as “sequential art” showed me that they share the same DNA as films: where one juxtaposes images in space, the other does it in time.

They both operate under the laws of The Third Something.

But the more I read, the more I see their potential beyond what film can do.

You could almost think of comics and graphic novels as movies made in slow motion - where every single shot has been stared at, studied, loved. It takes a lot longer to draw someone eating a bowl of cereal than it takes to film them doing it.

So what you get on a page is a sequence of images that feels that more attention has been given to it than a sequence on a screen. I say “feels” because obviously filmmakers put a lot of love into their sequences too; but their vision must always meet reality at some point.

Even on a low budget, graphic novels have the advantage of being able to imagine anything.

Another advantage, I think, is graphic novels can use simple and abstract images. Tintin, with the five marks that make his face, could be any of us. Film, on the other hand, is a slave to photorealism. Once you’ve seen Harrison Ford as Han Solo it’s hard to imagine him played by anyone else.

And then, maybe it’s just because the conventions of the graphic novel are less locked in than cinema. Can you imagine a movie doing the entire opening scene in extreme close ups, or suddenly switching to a single character’s point of view?1

I don’t know…it feels like silent images lying static on a page have more untapped potential than the noisy kinetic montages flying across our screens. There’s something in that silence, in the stillness, that feels very…reflective.

I read The Sculptor when it came out in 2015 and last year I read Maus both of which I loved. Last week C and I watched Persepolis, an animation that started life as a hit series of books.

Are there any graphic novel fans (or even novelists) among readers of The Third Something?

What should I read next to dig deeper into this art form? What can you tell me about it that I don’t know?

I’ll pass your recommendations on!

I forgot to mention this before, but you can respond to this letter just by hitting reply. Thanks to all of you who emailed me directly as well last week to be sure!