This past Monday was a bank holiday in the UK and if, like me, you’re a freelancer you probably, like me, didn’t realise until the last moment.

Caught short with a day off and no plans, I wandered down to The National Portrait Gallery tucked away behind Trafalgar Square. But rather than looking at austere oil paintings from Tudor England, I found myself in the bookshop - it’s got a great stock on creativity and art (my kryptonite); and that’s how I found myself with a copy of Mindfulness and The Art of Drawing by Wendy Ann Greenhalgh.

I’ve not seen this book promoted anywhere and so it had completely passed me by but, holding it in my hand, it felt like something I’ve been searching for.

Wendy Ann’s premise is that drawing can be a form of meditation, a way to achieve mindfulness - that elusive sense of…well, I don’t know. She uses words like “being-ness” and “is-ness” to describe it, which makes me think that - in English at least - we really need a better vocabulary.

She includes exercises which are interesting hybrids between meditating and drawing. She asks you to pick up your pen, for example, and then take deep breaths, connecting with the object in your hand before you put it to paper.

C was at a costume fitting on Wednesday morning so I had the flat to myself and tried one of the longer exercises, called Mindfulness of Seeing. You begin with a still object. She suggests a flower and, as we have a vase of roses (so long neglected they had dried into perfect fossils) on our table, I did the same.

The exercise has two parts.

First, Wendy Ann asks you to stare at the object in front of you for ten minutes.

“Looking…for a great deal longer than I would have looked. Looking, almost to the point of boredom, to the point where my mind wandered off and I had to bring it back to the rose.”

So I stared at this damn rose. I noticed all the obvious things, the gradient colour of the petals, the way they tightly wrapped themselves around each other like a millefeuille.

And as I looked longer, new details appeared on the rose. The tiny dimples running along the petals and the way they curled up ever-so-slightly at the edges. I slowly turned the vase around 360 degrees, seeing how its shape changed.

I stared so hard my eyes began to hurt.

After ten minutes, the second part: drawing. Wendy Ann tells you to put your pen onto the paper but insists you must not to look at what you’re drawing.

“Let this drawing be an extension of your seeing, taking you even deeper, even closer…Let your pencil move lightly too, following the movement of your eyes, so that it almost feels like your eyes and hands are one and it is with your gaze that you make marks on the page.”

I have never tried drawing like this before but I slowly got a feel for it.

As my eyes followed the curve of a petal, I moved my hands in (what I thought was) the same curve. I became absorbed as I counted each tiny peak on the edge of each leaf, and repeated them with my hands.

For twenty minutes I stuck at this, fighting the urge to glance down at what I was drawing.

When my eyes were really tired, I put my pen down, took a deep breath and finally allowed myself to look down: 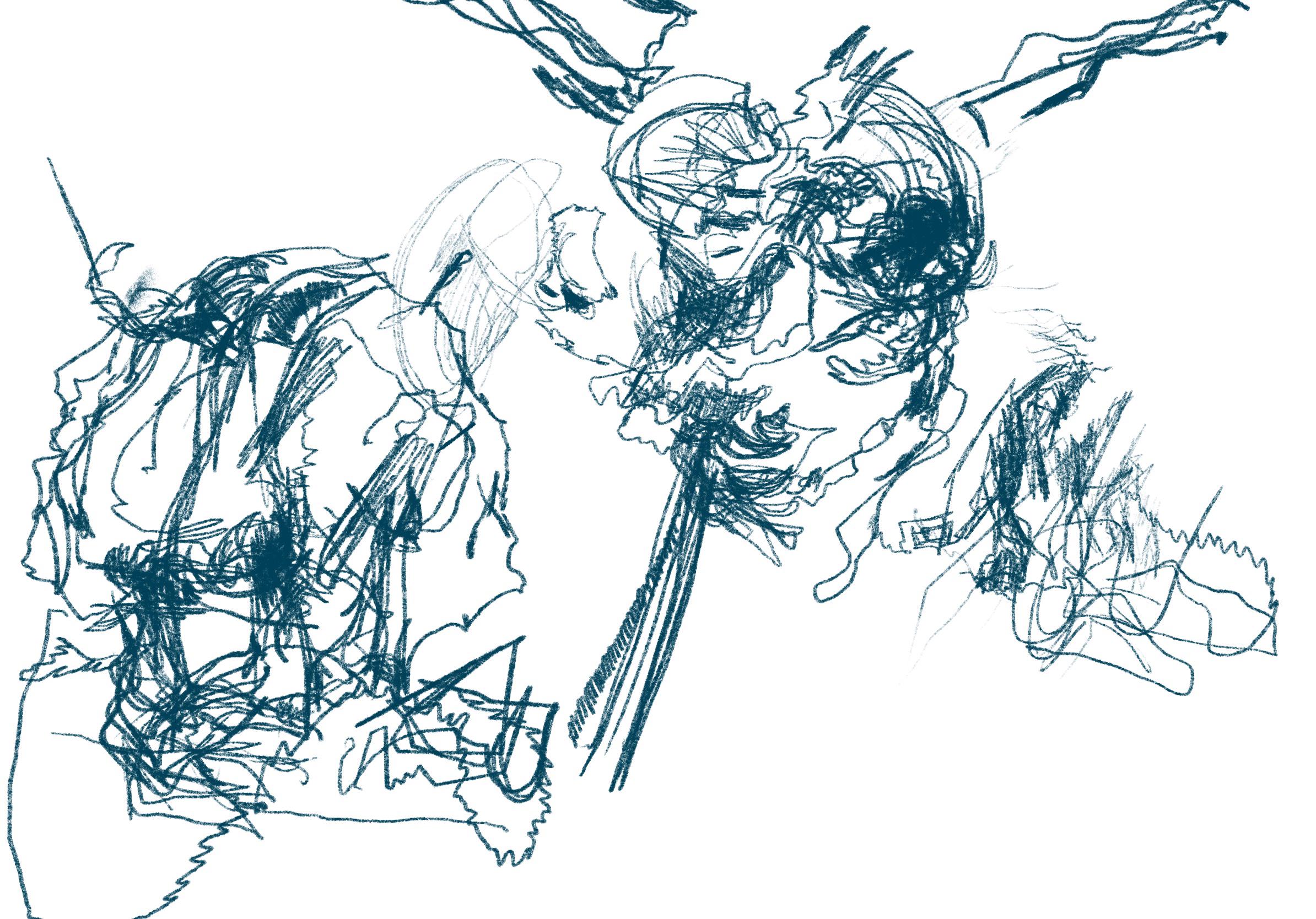 It doesn’t look anything like a rose, obviously. But, I don’t know, weirdly it almost seems like it captures the essence of one? Maybe I’m reading too much into it.

When I showed it to C she immediately saw the profile of a skull in the bottom left, which I now cannot un-see. I’ll call it Memento Mori.

Two of my goals this year are to draw more and to be more aware, more in the present, better at observing and recording the real world around me, moving beyond the passive act of looking to the active work of seeing.

What I hadn’t realised was that the two goals might be one and the same.