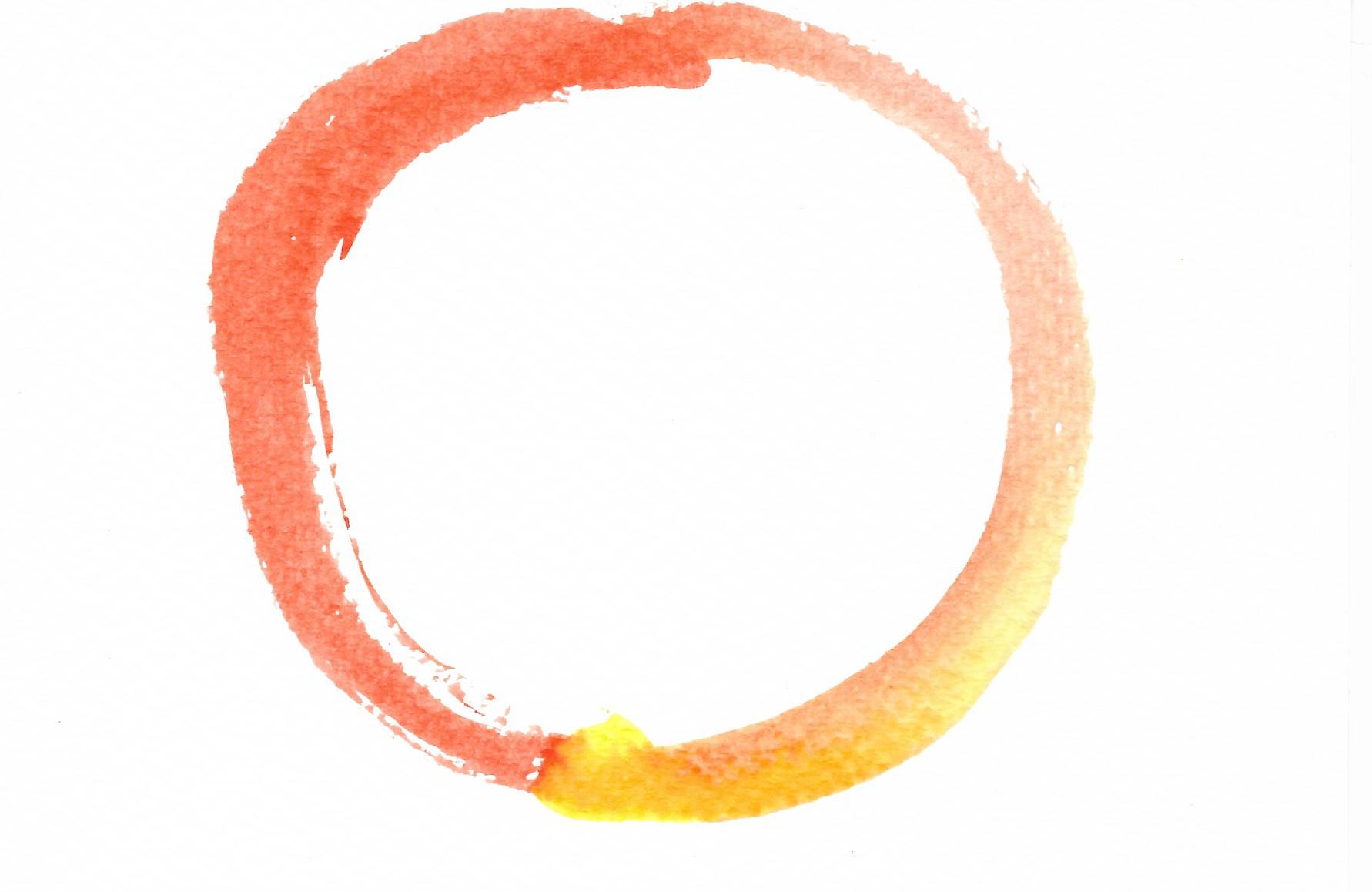 Week 26 already! That’s halfway to 52 which is the very minimum of letters I promised I would write. I’m enjoying these so much I feel like committing to a round 100!

To celebrate, let’s do this long-awaited Q&A.

Sorry it’s taken me a while to answer your questions - I’d explain, but you know all about it.

But first, the image above is something called an Ensõ Circle. I painted it with drawing inks on watercolour paper.

An Ensõ Circle is a wonderful meeting place of art and meditation. You load up a brush with paint or ink and place it on your paper.

You take a deep breath.

And then, on your exhale, you move the brush around to create a circle in one single motion. You can’t stop, you can’t correct, you just keep going until you run out of breath.

The circle is different every single time and so it becomes an expression of complete individuality - of the artist, but also of the moment. Their non-symmetry and the way the brush dries and tapers make Ensõ circles a visual record of imperfection and impermanence.

They’re also quite nice to look at.

On with your questions!

How did you decide to take the leap into independent video production? Were you working full time elsewhere in order to supplement your personal work? And is it even possible to find a job that will allow you to grow and experiment? - MARCIE

To answer this we need to rewind exactly one decade to the summer of 2009. The economy had crashed and I was working as a low paid radio reporter in a small city in the north of England.

I was enjoying the job but overall I felt dissatisfied with my life and wanted to change it.

But at the same time, I was terrified. A freelancer? Me? I wasn’t one of those people who just quit their jobs and took a big gamble.

And I probably would not have done it - at least not then - if it were not for my blog.

I used to write this blog about the future of journalism - it’s still online if you ever want to take a look. It was just a hobby but, thanks to a confluence of the right ideas at the right time, it drew an audience of journalists all over the world. And it was thanks to the blog that I one day received a phone call from Beth Brewster, the Head of Journalism at Kingston University in London.

She offered me a lecturing job. It was to teach just one undergraduate module for one semester, but it felt like someone holding a hand out from across the chasm.

So that’s how I ended up taking the leap. It was only a few hours a week, but I enjoyed teaching and was quite good at it and, for the first few years, it helped keep the wolf from the door.

I had to make lots of sacrifices to stay in the game. I almost never took holidays, I could not treat myself and, as my friends earned more and spent more, that was difficult.

For a long time my plan was to find something I loved doing and then find a way to make money from it. But experience has taught me that turning your passion into a job runs the risk of killing the joy.

Creativity does not like the strain of having to pay the rent.

An alternative approach is to separate the art and the money: get a job that pays the bills with minimum emotional or creative input and then carve out time to pursue your passions outside of it.

I have not succeeded in this, personally - my current gig is creatively very demanding, but it does leave me a couple of hours in the morning and, right now, this is where I practice, experiment and grow.

Where do you get your music? It can be such an important element of a film, one which sometimes will go completely unnoticed. Which are your favourite sources, and how do you decide? - MATT

There’s a big connection between music and film. Walter Murch once argued that without the symphony, we wouldn’t have been able to invent the movie. I am a very ‘musical’ filmmaker - I start looking for music right at the beginning of editing - or sometimes before.

For my video essays I sourced music from a bunch of different places. At the high end, AudioNetwork is a fantastic library of professionally composed and orchestrated music. A lot of their pieces are recorded at Abbey Road studios in London. They are a bit expensive so I would only use them for moments where the music was really needed to punch home emotion.

For more neutral and background music AudioJungle is a great resource. The quality isn’t always great but I could always find something that worked. Tracks are usually about $5-$15 each so much more affordable.

The best option for music, of course - collaborate with a great composer! Asking Dale Nichols to score Parallax for me was one of the best parts of the whole experience. An artist, if you give them the freedom, can bring a whole new dimension to a film.

I’m curious to hear an update on the rejection competition that you started last year. You’ve shared only once that you got two rejections out of ten. - NIKI

Ah yes! Last summer I discovered a ridiculously cool approach to dealing with rejection from writer Vivian Lee: turn it into a game.

I challenged myself to get Parallax rejected by 10 festivals by the end of the year, which of course, required me to enter them in the first place. In the end I got rejected eight times before the year-end, including by Short Of The Week, the IMDB New Filmmaker Award, The Atlanta Film Festival and the London Film Festival.

Each time I got rejected I put it in a spreadsheet and congratulated myself.

The purpose is not to get rejected all the time of course - it’s that in the course of achieving this goal, you might just get accepted!

Who are you? I mean, who are you really? Not on a meta level, just shit like.. do you have siblings? What were your parents like? Are you an Air Max person or you don’t wear shoes at all? Beer or chamomile? - TEZ

What a fun question! OK here is a list of assorted facts about your correspondent, in no particular order:

What are your favourite newsletters? - AMANDA

The three which I open with eagerness and make time to sit down and really read are the author Robin Sloan (contagious delight in discovering and creating great art); the actor Josh Radnor (sporadic but full of compassion and wisdom); and the musician Nick Cave (compassion and wisdom, weekly).

If you like books, entrepreneur Marc Thomas has a wonderful letter where he shares a book he’s reading; writer Craig Mod’s insights on publishing and walking in Japan are enriching.

I subscribe to several curative newsletters but find they tend to read each other and recommend the same things each week. Artist and filmmaker Nathalie Sejean and digital strategist Laura Olin are the two that consistently find gems from the fringes.

All of these people bring intimacy, serendipity and wisdom to my inbox, I hope you find them enriching as well.

Thanks for all your questions! Maybe we’ll do this again at the end of the year.

Before I go - I made a new video for The New York Times.

This one’s a bit different: I collaborated with an inspiring young woman called Dasha Navalnaya. She’s only 17, but I think she’ll be a name you recognise 20 years from now. Here’s the video.