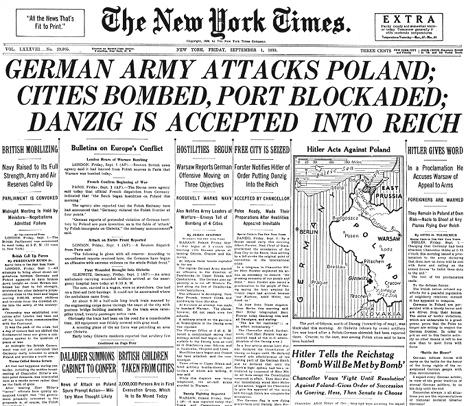 Today marks 80 years since the outbreak of the Second World War - or at least the European part of it.

Ralph Vaughan-Williams’ Symphony No.4 in F Minor always makes me think of that looming thundercloud, that tragic inevitable foreboding many felt in the 1930s (and some say they feel today).

I think the last three minutes of the first movement (starting around 5m45 in the above recording, conducted by RVW himself) are some of the most emotive sounds in classical music, lilting down through the d-minor scale, like leaves falling from an autumnal tree. There’s a story in those notes, I swear it: someone recalling a long-lost memory from an age slipping beneath dark waters.

One day, when that story reveals itself to me, I’ll put it to the music.

The anger and sadness of the 4th Symphony, finished in 1934, is often attributed to Vaughan-Williams’ fears of upcoming war. But he always said it had no message - it was “pure music”. Others, apocryphally, say he wrote it in response to a noisy bypass being built near his home.

I sit in one of the dives
On Fifty-second Street
Uncertain and afraid
As the clever hopes expire
Of a low dishonest decade:
Waves of anger and fear
Circulate over the bright
And darkened lands of the earth,
Obsessing our private lives;
The unmentionable odour of death
Offends the September night.

Again, it is viewed as an important response to war, but was later effectively disowned by Auden himself - he said it was “infected with incurable dishonesty”.

Despite this, it still feels like it resonates doesn’t it. The lines “As the clever hopes expire / Of a low dishonest decade” feel like they could have been written today.

There have been many, many - mostly bad - films made about the Second World War.

The best ones, in my opinion, are not the gloating, bellicose and patriotic stuff made by Britain or the USA, but those made by other nations: by Germany (Das Untergang), Italy (Germany, Year Zero) and Russia (Ivan’s Childhood).

There are some exceptions in the US/UK canon: The Best Years of Our Lives and (about the First World War) Journey’s End are two good examples of the genre.

Why? A good war film - like a good war poem or symphony leaves you with one feeling: what an absolute terrible waste.