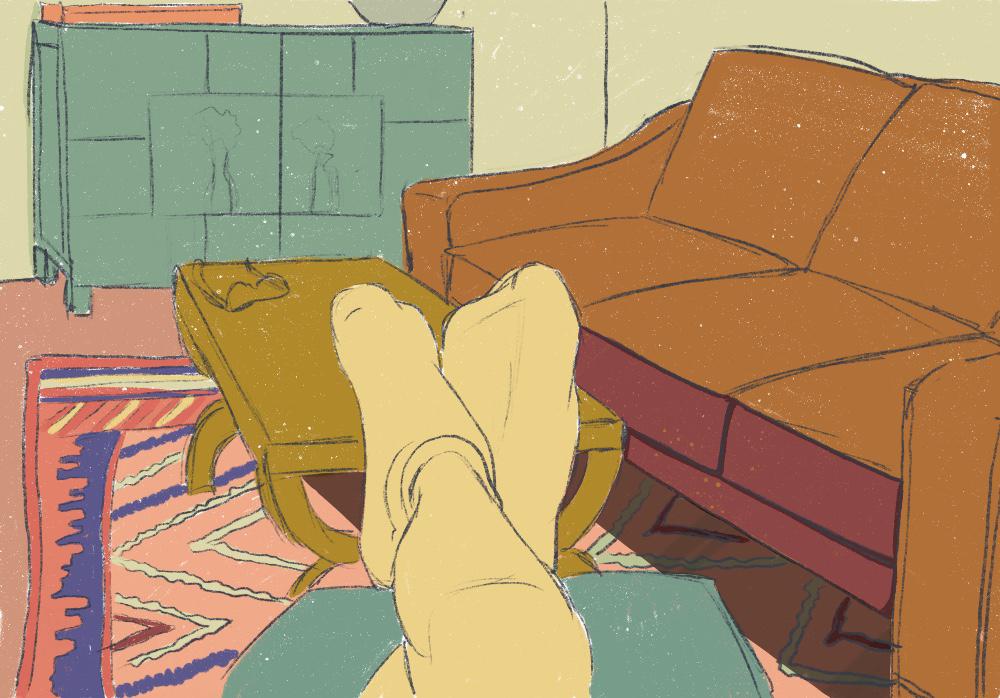 I'm quite proud of this painting I made in Procreate

Today, a few things I have read over the past month, ideas and provocations which are still lingering in my brain. That’s always a good sign, right?

These are all roughly related to storytelling and publishing.

What the hell just happened in Fortnite?

I’ve never been a gamer and I have never played Fortnite but it’s been on my mind since Monday when I heard what had happened the previous evening.

So…Fortnite is a multiplayer video game where you are dropped onto an island with 99 other players from all over the world and have twenty minutes to kill everyone before someone kills you.

250 million people have played this game, it’s a big deal.

But the designers also have an epic storyline that is unfolding on top of the gameplay, something to do with alien visitors, rifts in space, no-one really knows yet.

On Sunday evening, as millions of players were busy killing each other, they noticed weird things starting to happen around them. A rocket suddenly launched from the ground. Then, before their eyes, giant rifts appeared in the sky and…the entire island was sucked into a black hole.

Like I said, I’m not a gamer and I’ve never played Fortnite, but my mouth was wide open as I watched this video of it unfolding. I felt like I was there, witnessing some momentous event.

As this article argues, what makes Fortnite different is the environmental storytelling.

Video games (like all stories) employ narration to make sure the player follows what is happening: it might be text on screen, voice-over narration or a cutaway scene where characters dish out spoonfuls of exposition.

Fortnite does none of that. Instead the cues are buried in the environment: meteors might start falling from the sky, or an animal might behave differently than normal. If the players notice this, great, but the game doesn’t insist everyone does.

It makes me wonder if this environmental storytelling can be made to work in other mediums?

Would it be possible to write a murder-mystery novel, comprising of just pieces of evidence with no narrative handholding? One chapter is a transcript of an interview with a suspect, the next photographs from the crime scene. Instead of observing a divorced alcoholic detective go through the motions, a reader is the detective?

I had never thought of comics or graphic novels like this

“What can you do in comics that you can’t do in other storytelling forms?” “As far as I’m concerned, the form seems to allow for a greater range of simultaneous impressions, memories and thoughts other than any other visual language, the possibility of overlaying and overlapping both seen and remembered in a way that most closely approximates real consciousness. We have an extraordinary superpower as humans, which is to see with our eyes closed, redolently experienced when dreaming or when reading a traditional novel, where one ceases to see the words on the page and instead “looks” at the images being prompted in ones imagination. Comics function at an awkward point between the two, simulating the perception of the present using the tools of memory, and I’m simply trying to harness it, to draw the world from the inside out rather than the outside in.”

I can’t wait to get my hands on a copy of Chris’ new book Rusty Brown.

“Overlapping both seen and remembered”. There’s something in that concept I find really intriguing but I can’t quite articulate it.

But I do feel that graphic novelists are more creative in how they express ideas visually than some of us working in the moving image. I think a lot about if and how treatments can be transported from one medium to another.

What does publishing in the 21st century look like?

From novelist Robin Sloan in his newsletter:

For me, personally, “learn to code” has been a decades-long intellectual and emotional engagement. If, instead of coding, I’d spent all those accumulated hours practicing the guitar… I would now be VERY good at the guitar. But even today, having more-or-less successfully “learned to code,” I wouldn’t pass the first interview at Google. So… what is it I’ve learned to do, exactly? Well: I can make things happen on screens—and not just things pre-packaged, pre-determined, but new things.Maybe occasionally even things that have never happened on screens before. And I think this is important for aaalmost any kind of artist in the 21st century. No; let me scale that back. It’s important for any artist who aspires to be a pathbreaker. This is totally optional! There’s plenty of art you can make using genres pre-determined, pre-packaged. You could write a whole series of absolutely tremendous literary horror novels and never learn a thing about code. You could win prizes. Obviously.But for anyone who feels the same itch as me, for whom these questions about the 21st century feel as urgent, then… I think code might be non-negotiable. I could be wrong! But this is what I think. It’s becoming clearer to me—again, I could be wrong—that software is the medium. Simple as that. There is not some dream app waiting. The app is always going to kinda suck, because it’s going to be owned by some corporation and it’s going to be, by definition, a bit generic; generic in a way not even the most blasé trade publisher would tolerate. So, you have to design the book-that-is-not-a-book, and of course there are rules and guidelines, there’s art and craft, but every book is different, so, just sit down and do the work.

What has lingered with me is not Robin’s top level point (although I suspect he’s right, code could well be a significant form of expression in the 21st Century and what constitutes art might shift from a static painting or book into a dynamic tool); it is the idea beneath it.

That the job of the artist is not just to make something entertaining, or pretty, or even emotionally profound, but that it might be creating interesting solutions to problems. Something that rests inbetween art and entrepreneurship (without all the startup bullshit).

And the solution is bespoke - it’s custom made from original parts, not working inside the confines of one of Mark Zuckerberg’s apps.

If the idea still doesn’t make sense, consider the difference between our two letters: Robin designed the platform for his newsletter himself, it is completely unique, it has the features he needs and none of the ones he does not. I publish my letter using a third-party platform, ultimately hoping to get rich from our weekly conversations. There is a template my words fit into that makes it look identical to every other Substack newsletter.

It is still hazy but through Robin’s words I can glimpse a better way of making and publishing things.

Writer Craig Mod in his newsletter (also a custom made piece of software)…actually there’s just too much to quote from this one so, if you are interested in the way stories of all kinds are published or could be published, get yourself a cup of tea and read the whole thing!

I have no good answers to any of these questions but they’ve been rattling around in my head for weeks. Now they can rattle around in yours too!