Back in December I had this idea for a project: using inks and brushes I had just bought, I would offer to draw and paint you lovely Third Something readers a postcard and send it out to you, wherever you are in the world, for free (#050).

The postcards are now out in the wild. Here are some which have already reached their destinations! 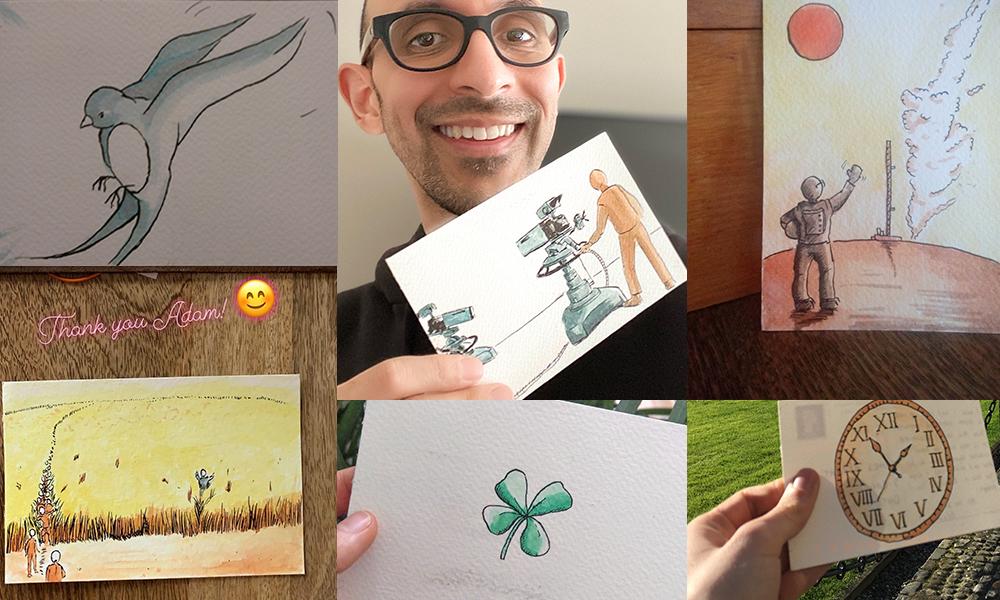 Today, a write-up of how I executed the whole thing with some thoughts on doing projects like this in general.

I received 28 replies to the offer: about 15 from the US and Canada, half a dozen from Europe (everywhere, from Belgium to Romania, Spain, Slovenia and Ireland) and the rest from all over, as far away as India.

28 was a good number: a bigger stretch than I had expected, but still manageable. Any more than 30 and it would have morphed into a burden.

I left the requests open. “Give me something to draw, and I’ll draw it”, I said. I wish I had defined some constraints - I was hoping to practice drawing figures but I didn’t receive many requests for those.

On the flip side, it forced me to draw things I have never drawn before including animals, trains, landscapes and abstract concepts! 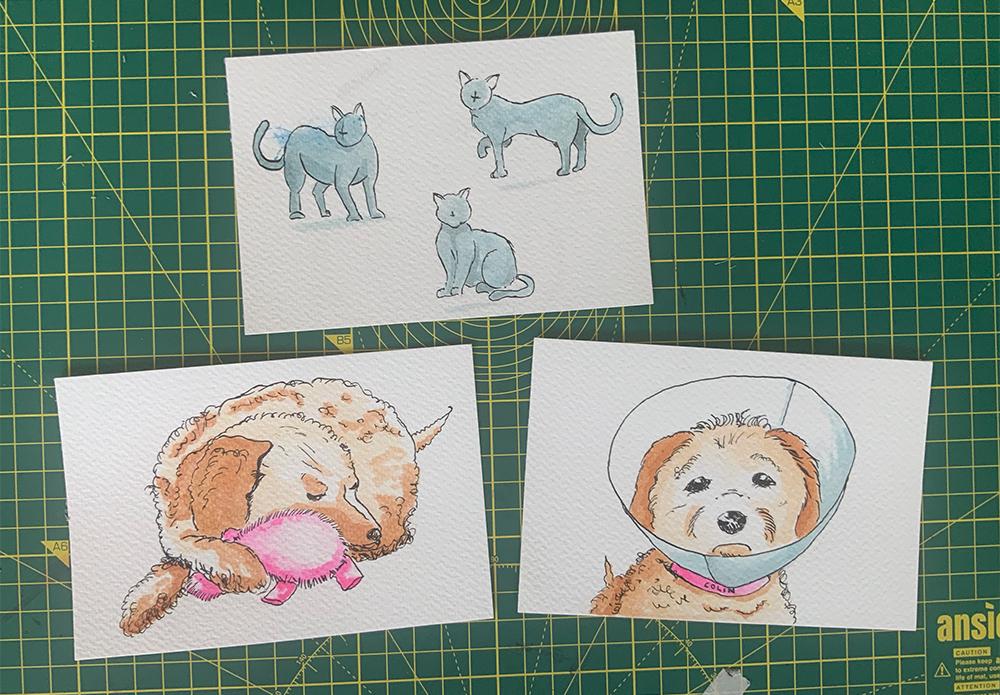 I started with a master list - everyone’s request, in the order I received them, next to their name.

I lightly pencilled each card with an HB or 2B pencil, beginning with the easy ones (people who wanted a specific object or scene) leaving the more interpretive images ‘til last.

I used reference photos for almost every drawing, which I understand is how many artists work (there is no shame in copying!)

Once every card was pencilled, I spent a week or so inking them, usually three or four at a time. I used black India Ink and an old fashioned nib, dipping it into the pot like some kind of victorian novelist. 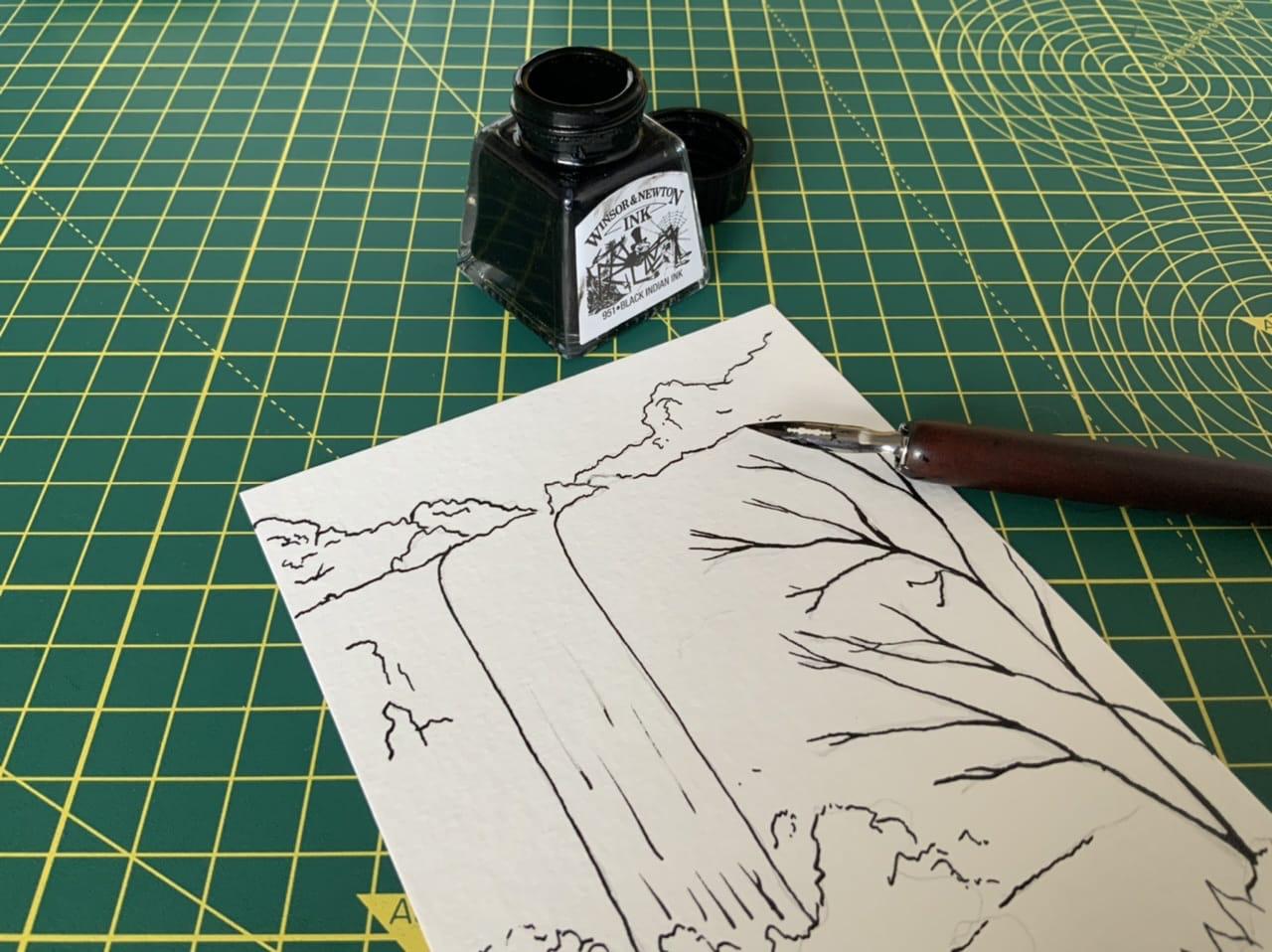 I found this seriously enjoyable. India ink is so rich and the nib created this organic definition in thick and thin lines as you apply pressure. I learned to ink from left to right, to make sure I didn’t smudge the lines with my hand; I also learned inking large circles is very hard.

Once every card was inked, I nervously entered the final stage - painting.

There is a rigmarole to painting inks that is in itself kind of satisfying. You must prepare one ink at a time, removing it from its box, carefully unscrewing the lid, and pipetting a small amount onto a palette (to stop the colours being contaminated) before carefully putting the lid back on. You want to ensure you never have more than one ink open at any time - the risk of knocking them over is too high!

The Windsor & Newton inks are vibrant, they dry quickly and layer extremely well; I could effectively build up rich layers of colours in a short period of time.

Eventually I learned to start with a light background wash, before layering shadows and highlights on top.

I also learned to pick a colour temperature for each painting and stick with it - either warm (with Canary Yellow, Nut Brown, Violet) or cool (mixing Blue and Emerald created a very pleasant turquoise; the tiniest drop of black into a Blue created a nice stone grey).

As I painted the final landscapes I discovered laying Violet over Nut Brown is perfect for subtle mountain shadows. 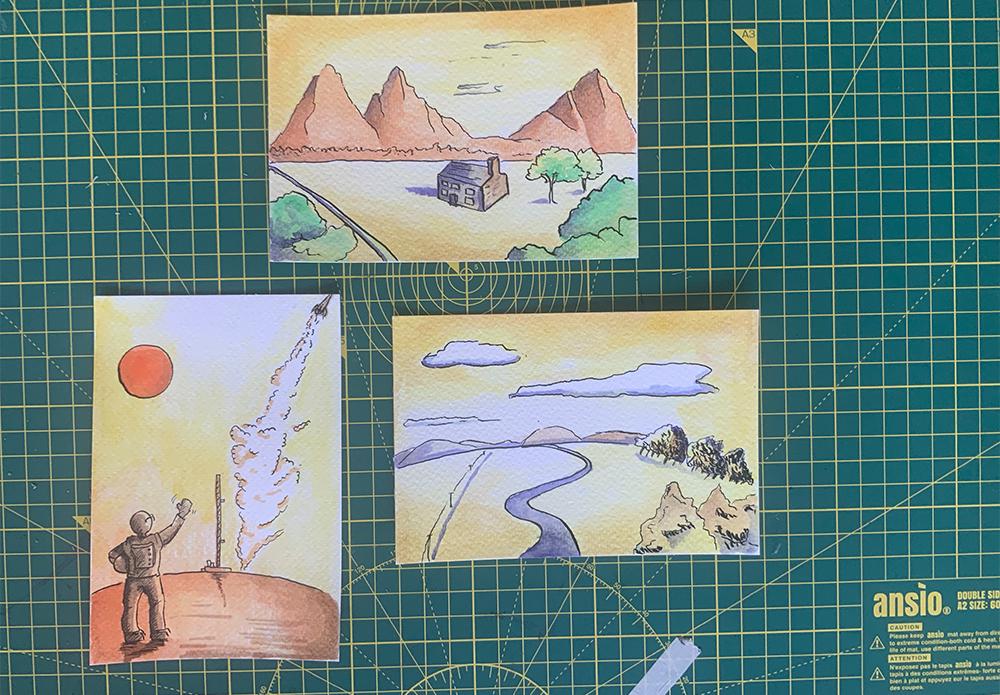 Not every card was improved by the paintwork - one or two I sent out with an apology for how the colours turned out! 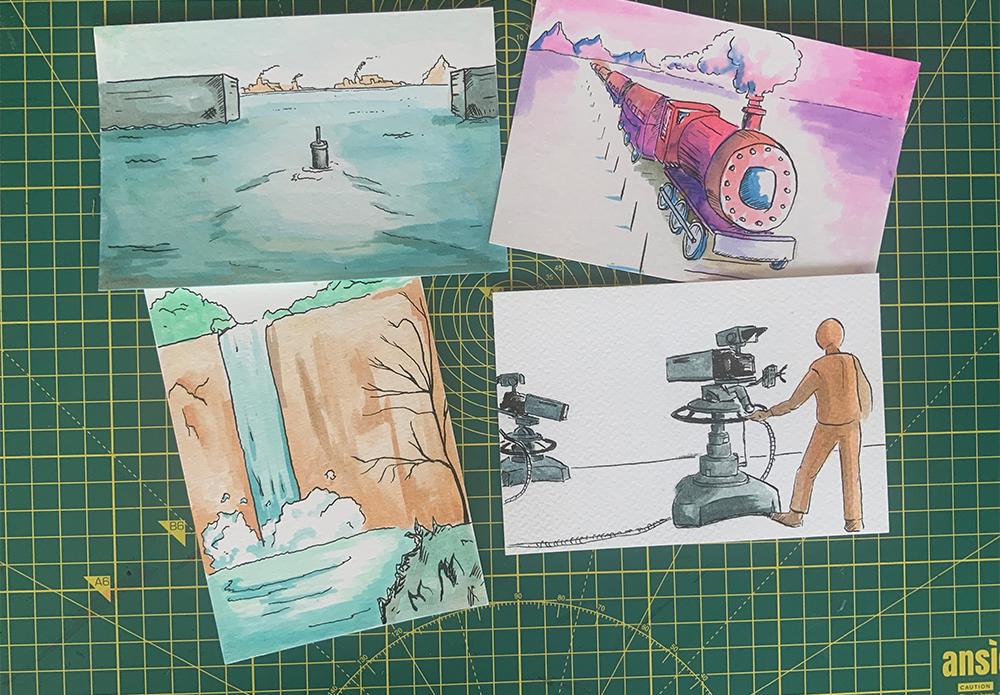 This was comfortably covered by the donations some of you have made over the past year to my PayPal tip jar - a timely reminder that you are always welcome to throw in a few dollars!

Shirin very generously sent me an Amazon gift card and Elise drew me this lovely thank you dog: 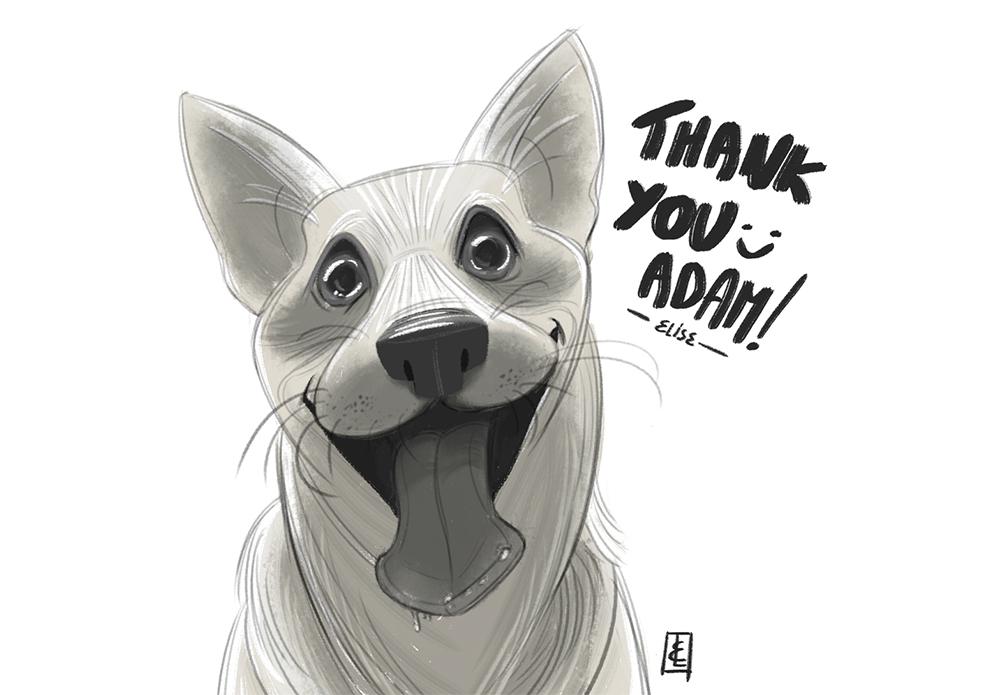 The greatest reward for me was simply that I got to spend nearly six weeks creating some visual art every day. It got me moving again and introduced me to a new medium.

Some people have asked why I didn’t charge money for making the postcards, considering the investment.

It has been a positive reinforcement of how powerful in the act of giving and receiving gifts can be (#015). There’s a magic in the generosity that is hard to recreate in a business transaction.

Can I go further? In this hyper-capitalist world, I think there is tremendous power in doing things outside of the market. In Postcapitalism, the journalist Paul Mason argues that capitalism survives by expanding into as many arenas of life as possible - it’s called ‘capturing externalities’. So once, where you might have offered to walk your neighbour’s dog for free, today there’s an app where you can pay to walk a stranger’s dog.

I am definitely not saying artists should give everything away for free, not at all. But these small acts sometimes feel like you’re holding a door shut into a secret room; outside, the market is huffing and puffing furiously trying to blow it open and consume its contents.

Aaaaaallll of which is to say, I have loved doing this project and I will do something similar again later in the year!