I received lots of interesting responses to last week’s letter. One particular line struck a chord with many of you who pasted it back to me into your replies:

In my amateur mind, you draw and hope it is good, and if it is bad you feel disappointed and give up.

I want to unpick this idea because there’s a way of thinking at the heart of this sentence that has been holding me (and, it seems, some of you) back.

In his reply, a Third Something reader called Andy wrote this:

I feel that one of the hardest things for me is getting hung up on perfecting the theory of being more productive and not actually just ‘doing it’.

As an accurate summary of my approach to life and work so far, “perfecting the theory” comes pretty close.

About ten years ago I became really interested in storytelling. I had picked up a copy of Robert McKee’s book Story on impulse and found it so fascinating I wanted to know how it all worked.

Now, at the heart of that fascination was a quiet desire (which dare not speak its name) to tell my own fictional stories .

Instead of writing those stories, I embarked on a decade-long quest to “perfect the theory”. I read book after book on narrative theory, signed up for screenwriting courses (that didn’t involve actually writing a screenplay); I even taught a couple of courses on storytelling!

About four years down this path I finally started making my own little films - but even then, the goal was this: to perfect the theory so well that when I sat down to make a video, I would get it right first time.

That is what I thought ‘being good’ at something meant.

And it is what held me back in my drawing: the idea that I would only be good when each pencil stroke would appear in the finished piece.

But the idea that art is created by means of immaculate conception just isn’t true. The drawing process I outlined in the last letter (#067)has taught me this:

This is the message at the heart of the popular sayings about creativity that some of you emailed to me during the week: “all writing is re-writing”; “we all have 10,000 bad drawings inside us, the sooner we get them out the better”; and Picasso’s line “to know what you’re going to draw, you have to begin drawing”.

I think when we focus on perfecting the theory, what we are really doing is asking some invisible power for permission to be creative. “Look, I’ve read all the books!” we shout into the void, “that means I get to make something, right?”

I feel regretful that I lost so much time perfecting the theory when I could have been getting my hands dirty and racking up the flying hours. Of course, time spent reading is never time wasted and having a good understanding of the theory of behind what I do helps me do it a little bit quicker.

But that’s enough for now.

Finally, if I were to push this idea just one level deeper, I would offer this advice: pick a medium that you enjoy making mistakes in.

Here are a couple more sketches I drew in the last week.

Glueing the ‘rehearsal’ sketches next to the finished drawing is a reminder for my future self: Adam, you did not draw this picture first time. 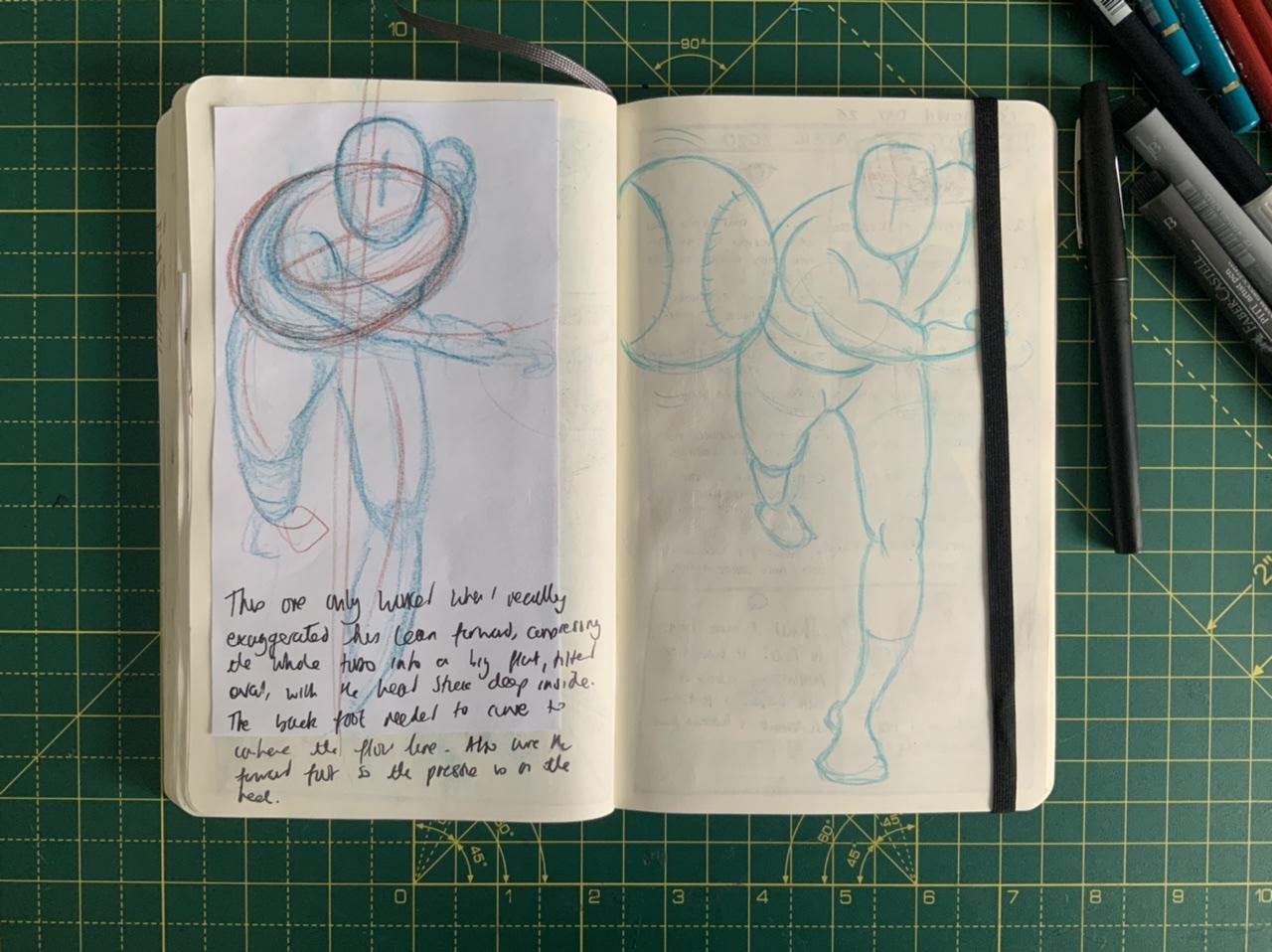 I find the action poses easier than the more neutral ones. This guy walking, lost in thought, took me many attempts. 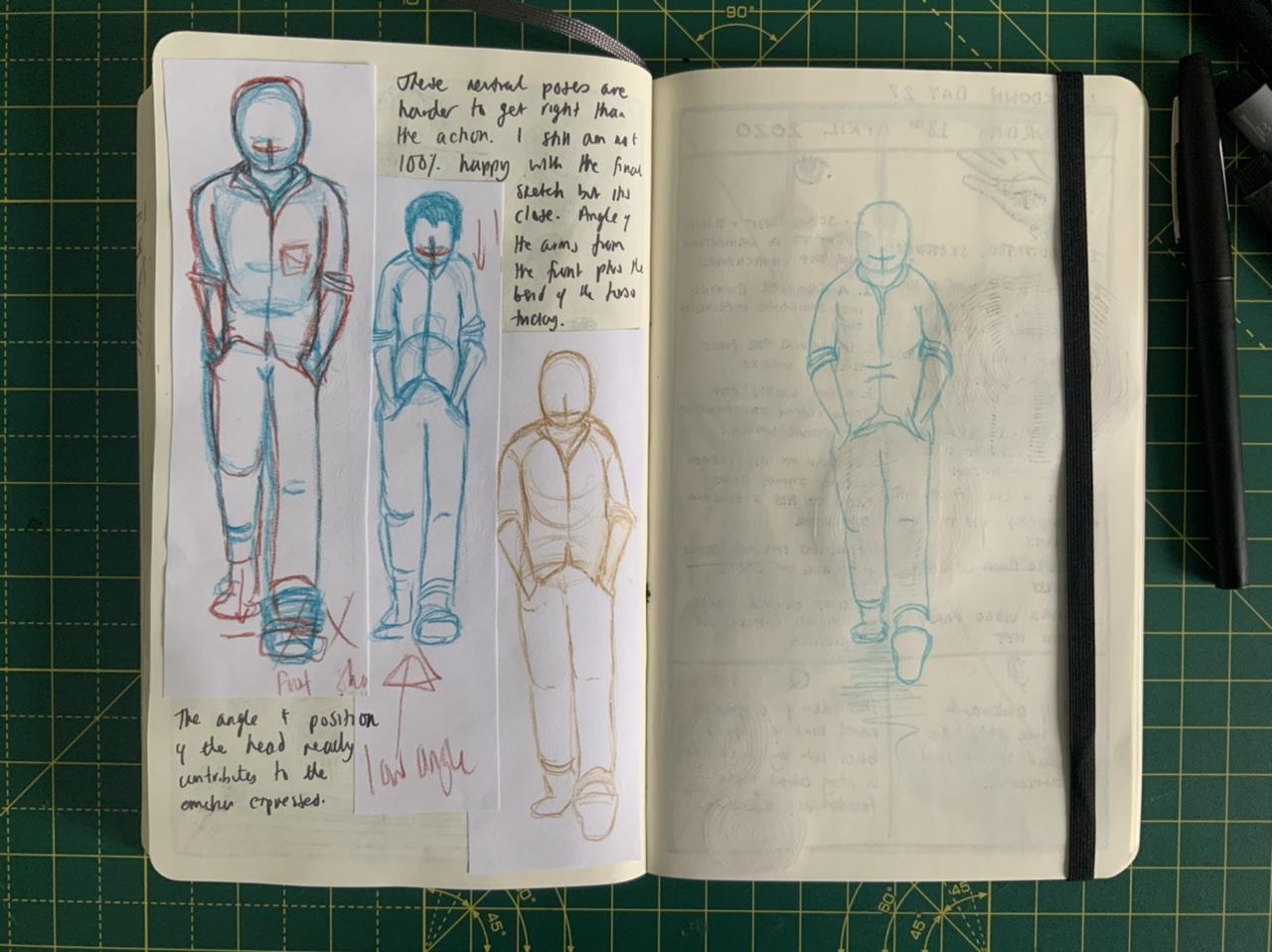