This letter reaches you on Day 49 of the UK coronavirus lockdown. Tomorrow, the half-century.

A long period of being legally obliged to stay indoors is probably not the best time to start a visual diary but never-the-less that is what I have been trying.

My sketchbook has two parts to it: lots of drawing practice (#67) and a two-page journal, which I fill out first thing every morning.

This is a variation on Lynda Barry’s Daily Diary which she details in both Syllabus and Making Comics and it goes like this: on the left-hand page you create a ‘review frame’ and list seven things you did in the previous 24-hours, seven things you saw, one thing you heard and one question you have been thinking about.

I might share these with you in a future letter, but it is the right-hand page I want to tell you about today.

Here you turn one or more of those memories into an image or sequence of images. In fact, Lynda lays out five different formats and encourages you to try each one for at least a week.

“Each way of keeping a diary will change what you notice in the world around you” she writes.

“Changing methods every week will make this daily practice a companion. In the same way certain friends make you see the world in a different way and the way certain companions make the world more alive, the daily diary will wake you up.”

The first format involves a single image, taking up half the page, with descriptive text beneath. Lynda suggests alternating between writing and drawing first. 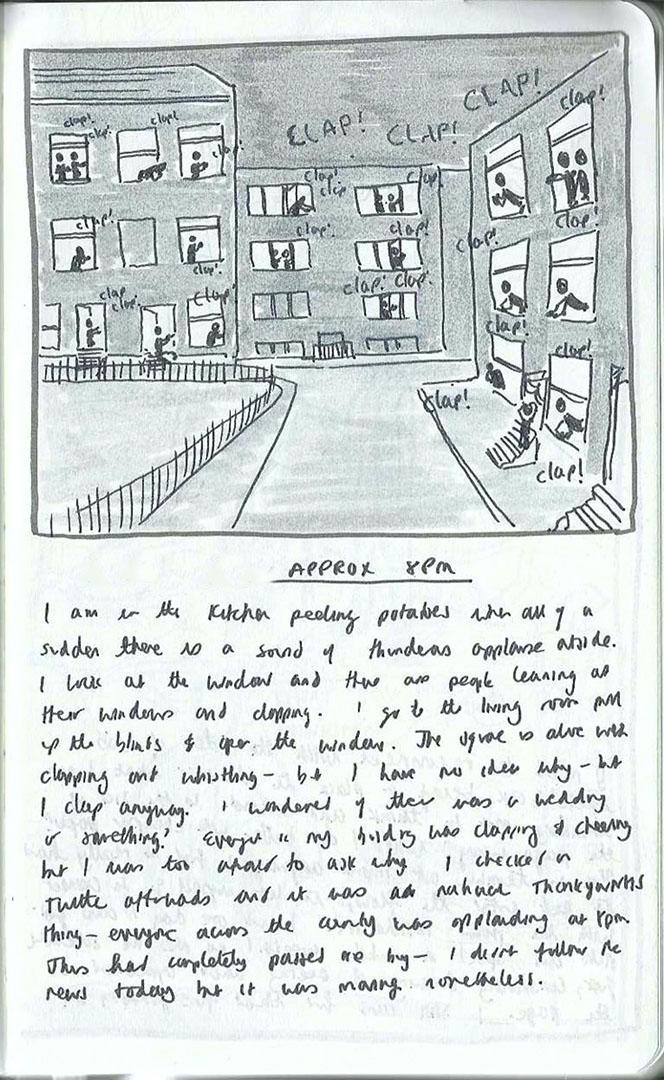 This is from the first week of the lockdown where, so engrossed was I in working for an American newspaper, I missed the news of an applause across the UK for NHS workers. We have been doing this every Thursday at 8pm since.

The second format divides the page into quarters and you draw four silent moments from the previous day. You can make them separate scenes or connect them into a sequence. 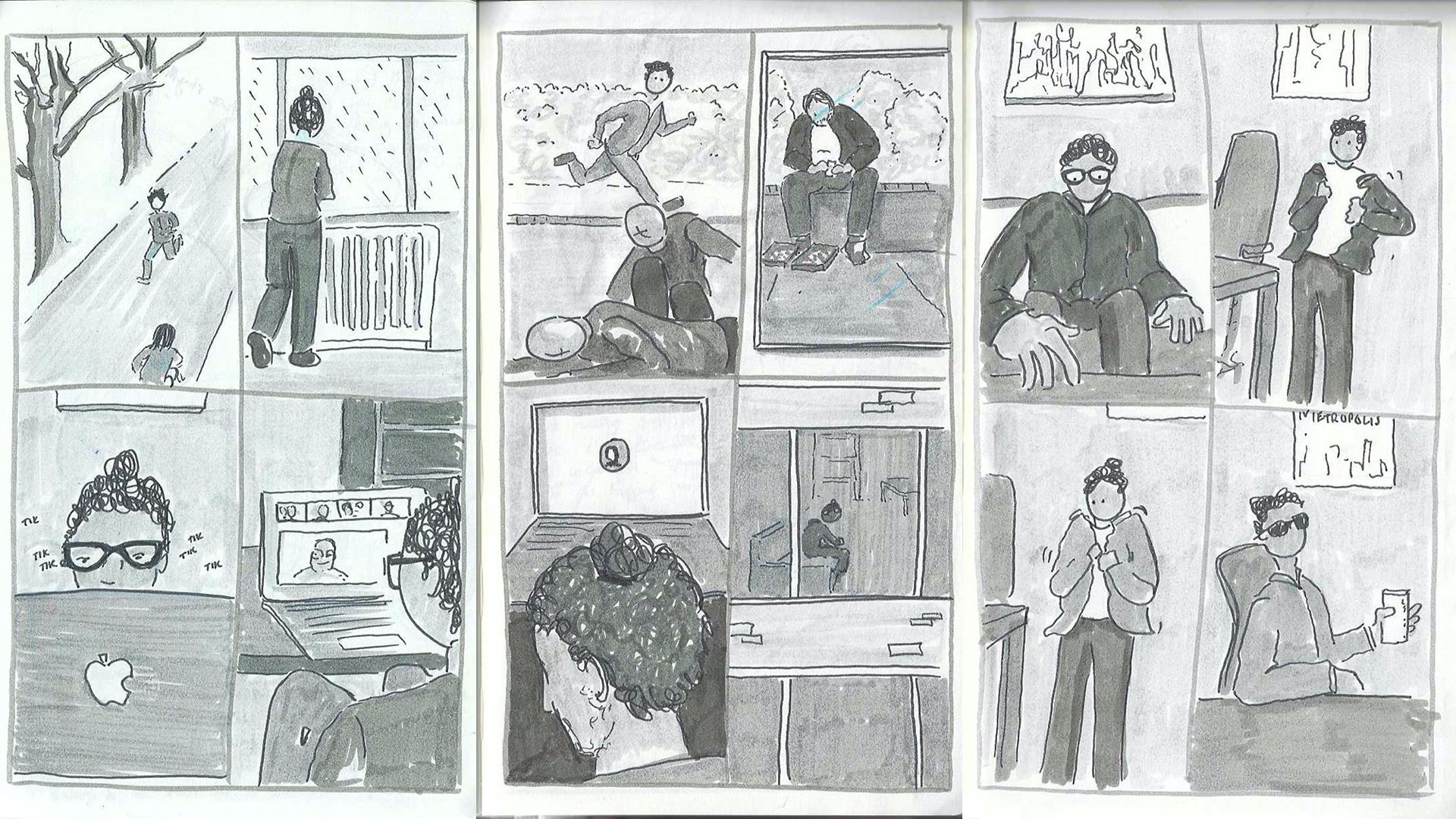 One rule Lynda Barry stipulates is that your full body must be in every panel, a rule I try to obey but don’t always. “Whole bodies in motion conjure stories in ways faces alone cannot” she writes.

As interesting as these times are, the sedentary monotony of life under lockdown is a visual challenge. From how many different angles can you really draw yourself on Zoom?

This limitation has forced me to be more creative than perhaps I would have been.

The third format combines the previous two into these cute checkerboards. Again, Lynda suggests alternating between writing and drawing first. 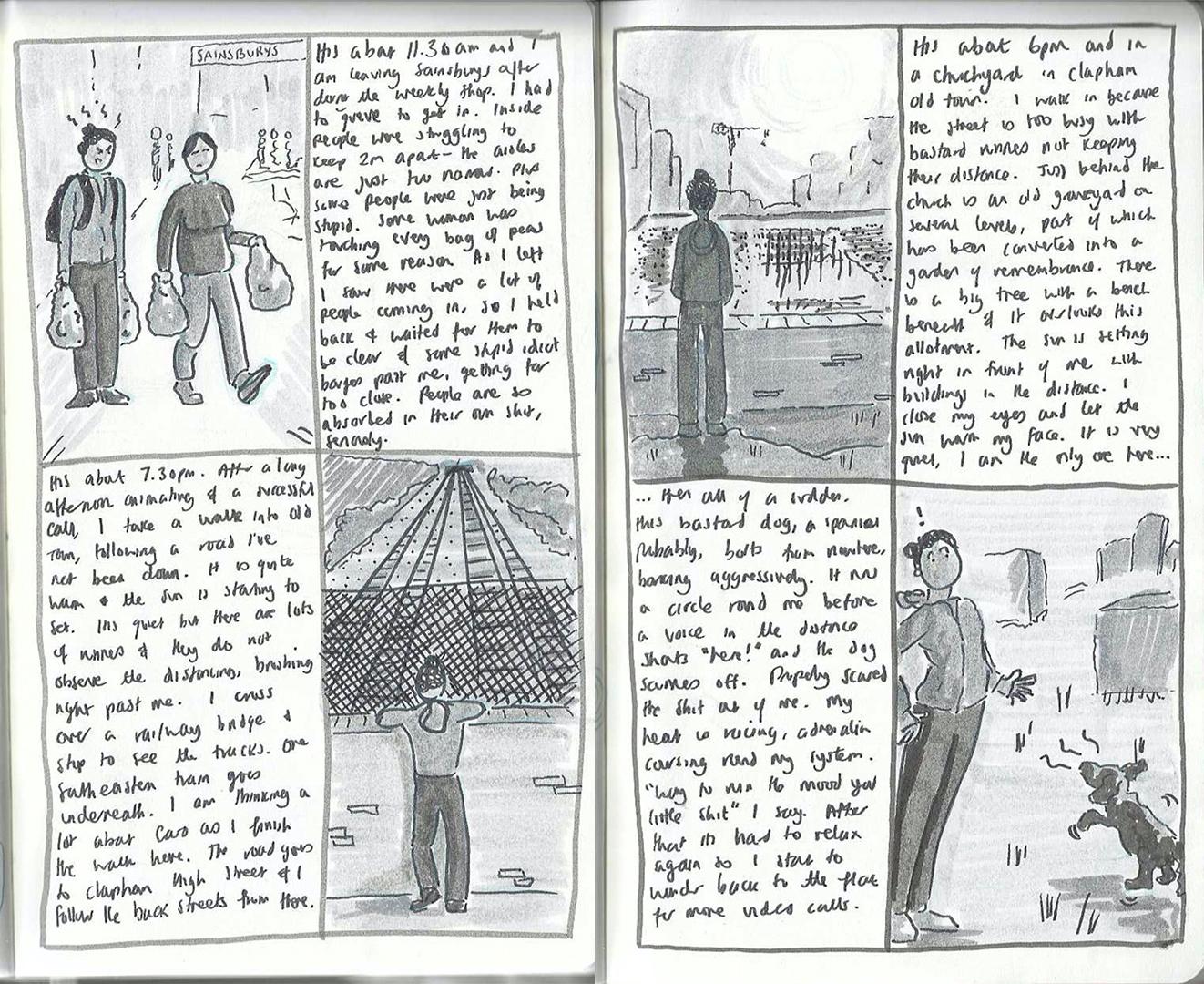 I’m using a Flair pen (they dry quickly and don’t bleed) and colouring with six grey and brown Pitt Artist pens from Faber-Castell. Using felt-tips stops me being too fussy and a limited palette unifies all the diaries into something pleasing.

The more I drew, the more it felt like my journal was becoming a solid body of ‘something.’

By this third week it was becoming satisfying to flick back through previous entries.

In week four, another four-panel page but this time the panels are divided into triangles.

You’re supposed to imagine a square panel which has been cropped, rather than distorting a scene into a triangle shape. 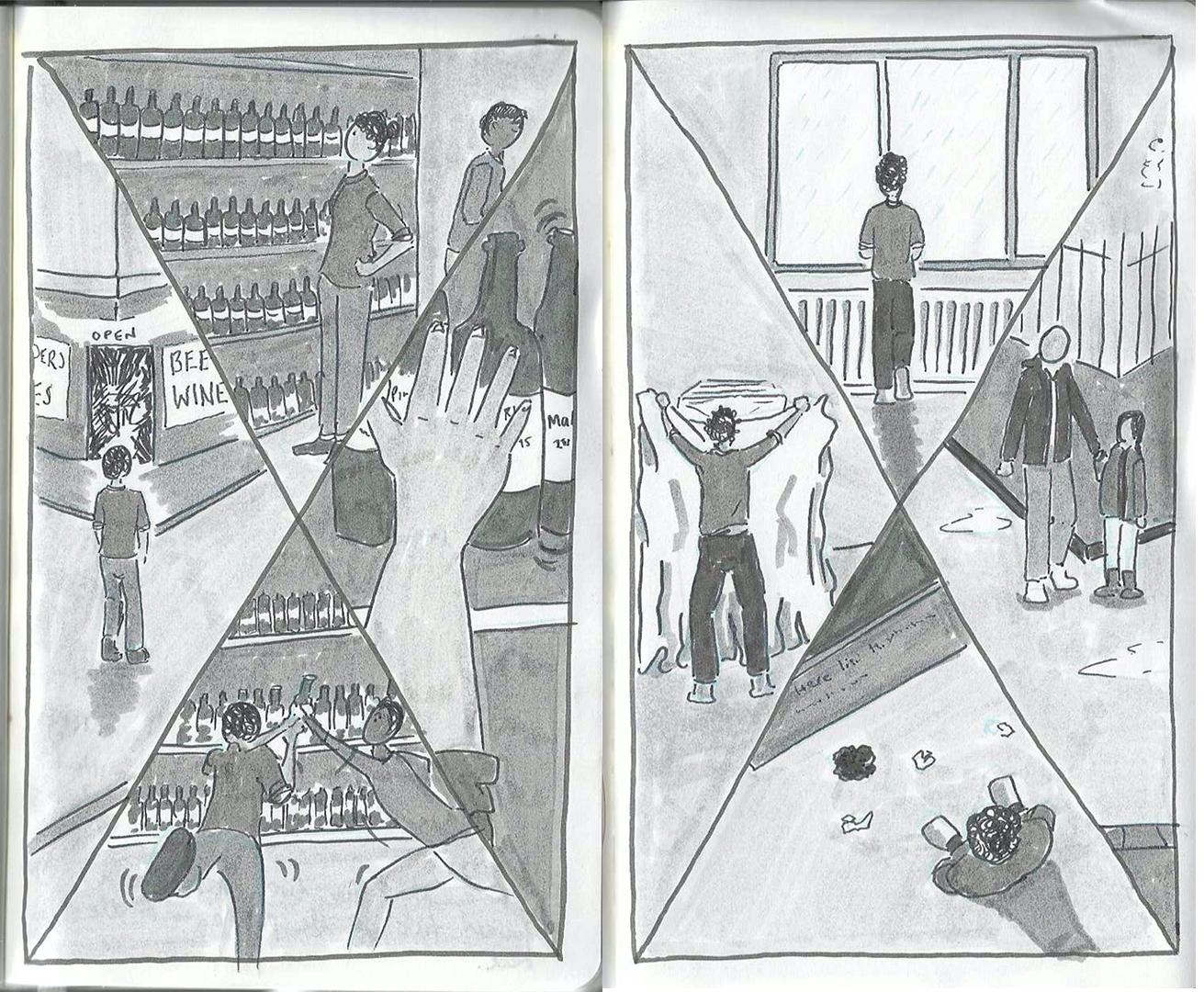 By now I am flipping between conveying a scene across several panels (such as when I nearly knocked over a shelf of wine bottles in a store) and illustrating four separate moments. 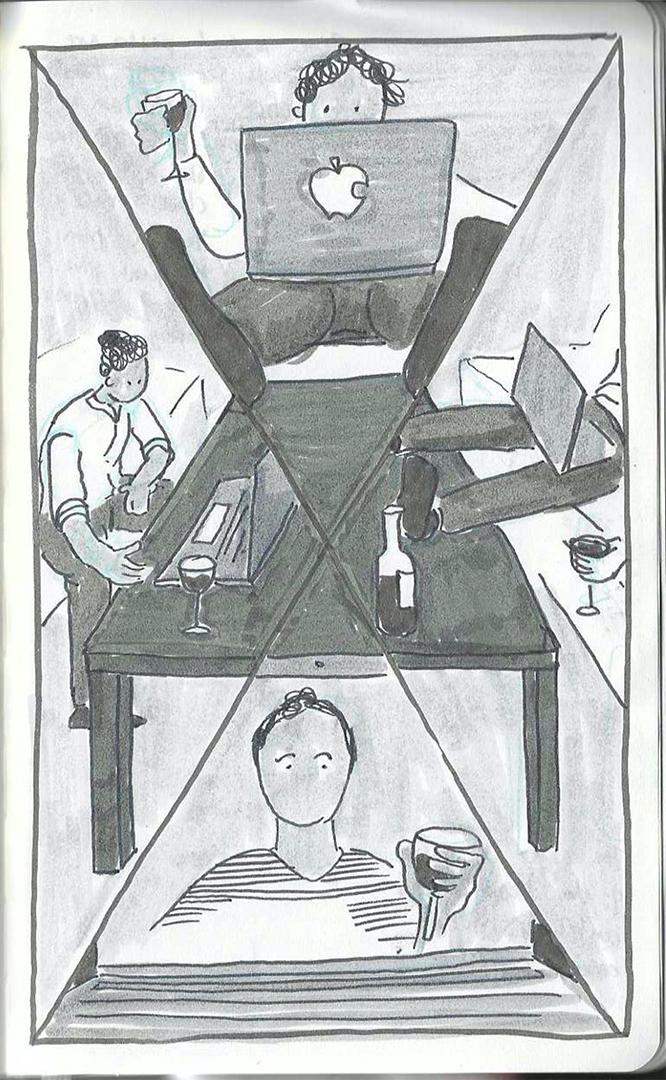 I find creating sequences of images more rewarding than separate moments if only because they tell a little story.

So by the fifth week, I was creating a one page comic each morning. 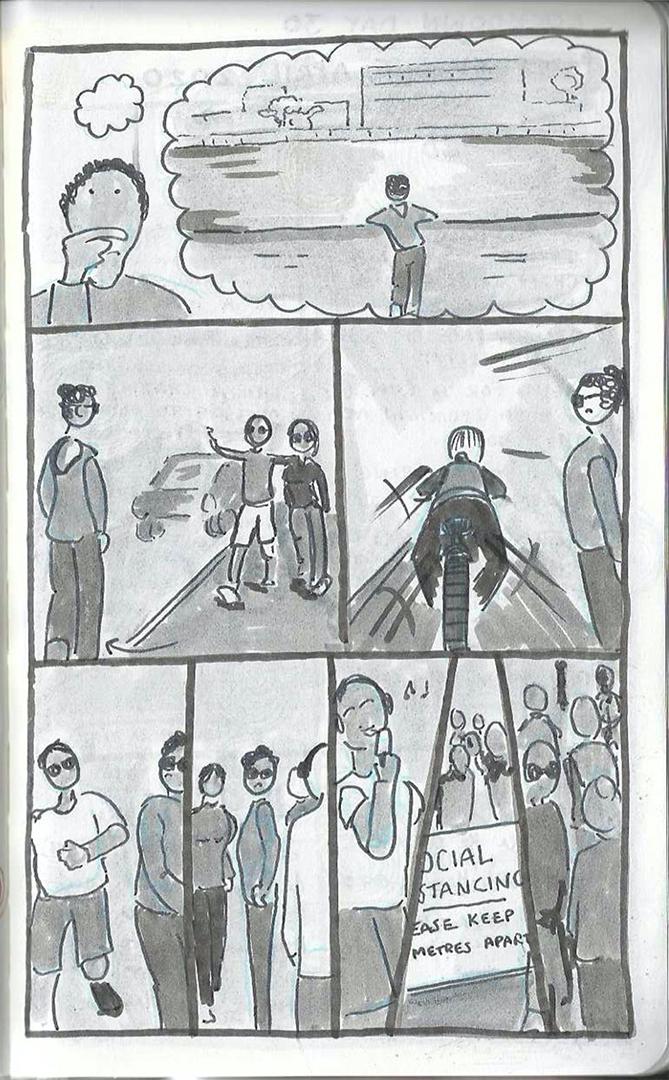 These have grown from silent sequences to pages more closely resembling comics with speech bubbles and thought balloons. 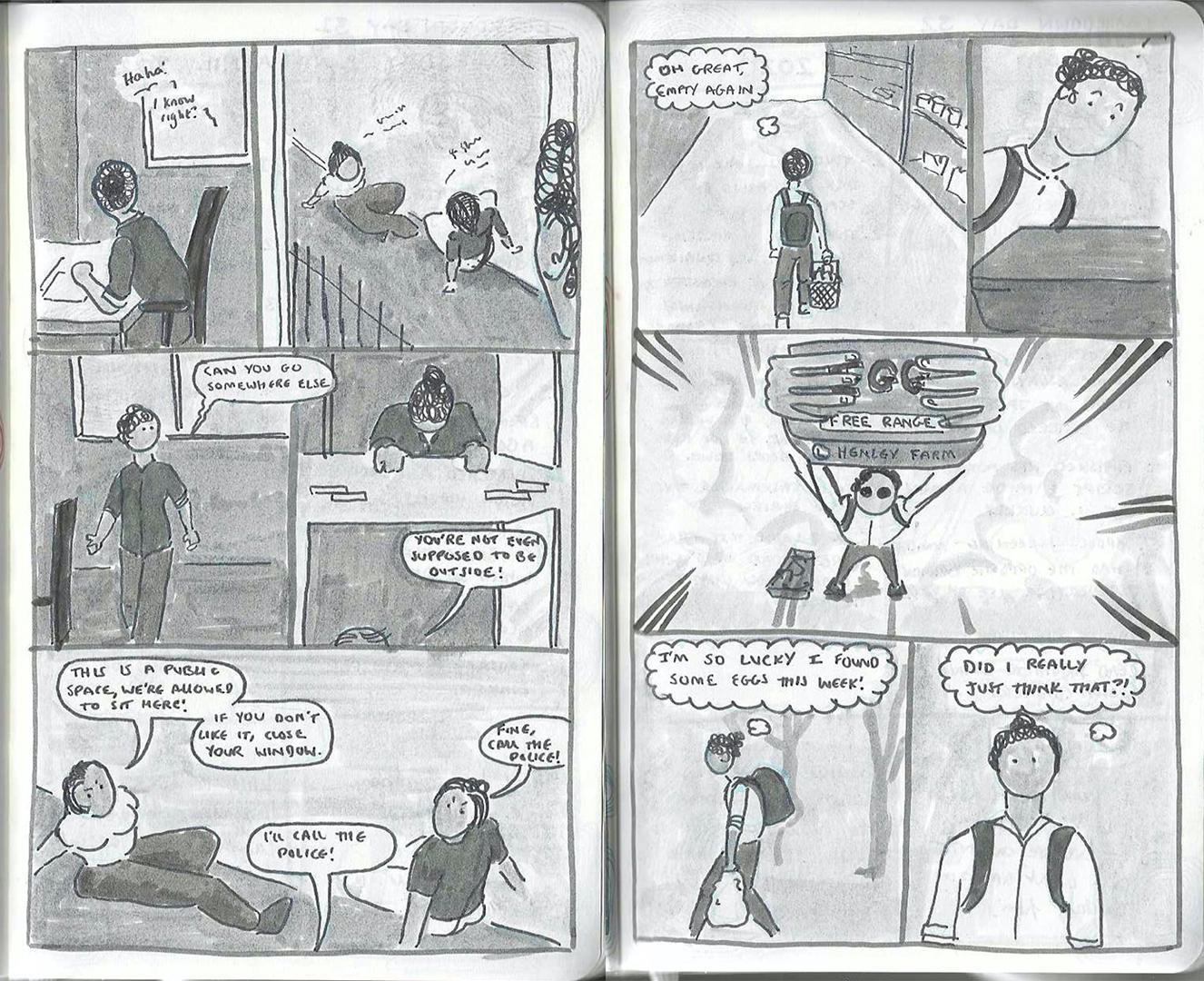 Keeping a visual diary is changing how I notice the world around me.

At first it is a pressure (‘I must find something for the diary tomorrow!’) but as the habit has formed I have caught myself looking more actively.

Sometimes the moments I notice are as mundane as a father talking about James Bond films with his daughter after a rainstorm or the flight of a bright green parakeet past my window.

But this diary and the lockdown itself have taught me that life is in the small moments.

The thing that stopped me from journaling before was the fear that my life isn’t interesting enough.

What I’ve learned from these most fascinating - and boring - of times is that it isn’t about having a wildly interesting life, but in finding fascination in the little things. Everything is interesting if you really pay attention to it.

And then one sunny morning, as you’re considering making this very point to conclude your next newsletter, you’ll walk right past a world leader on your morning stroll. 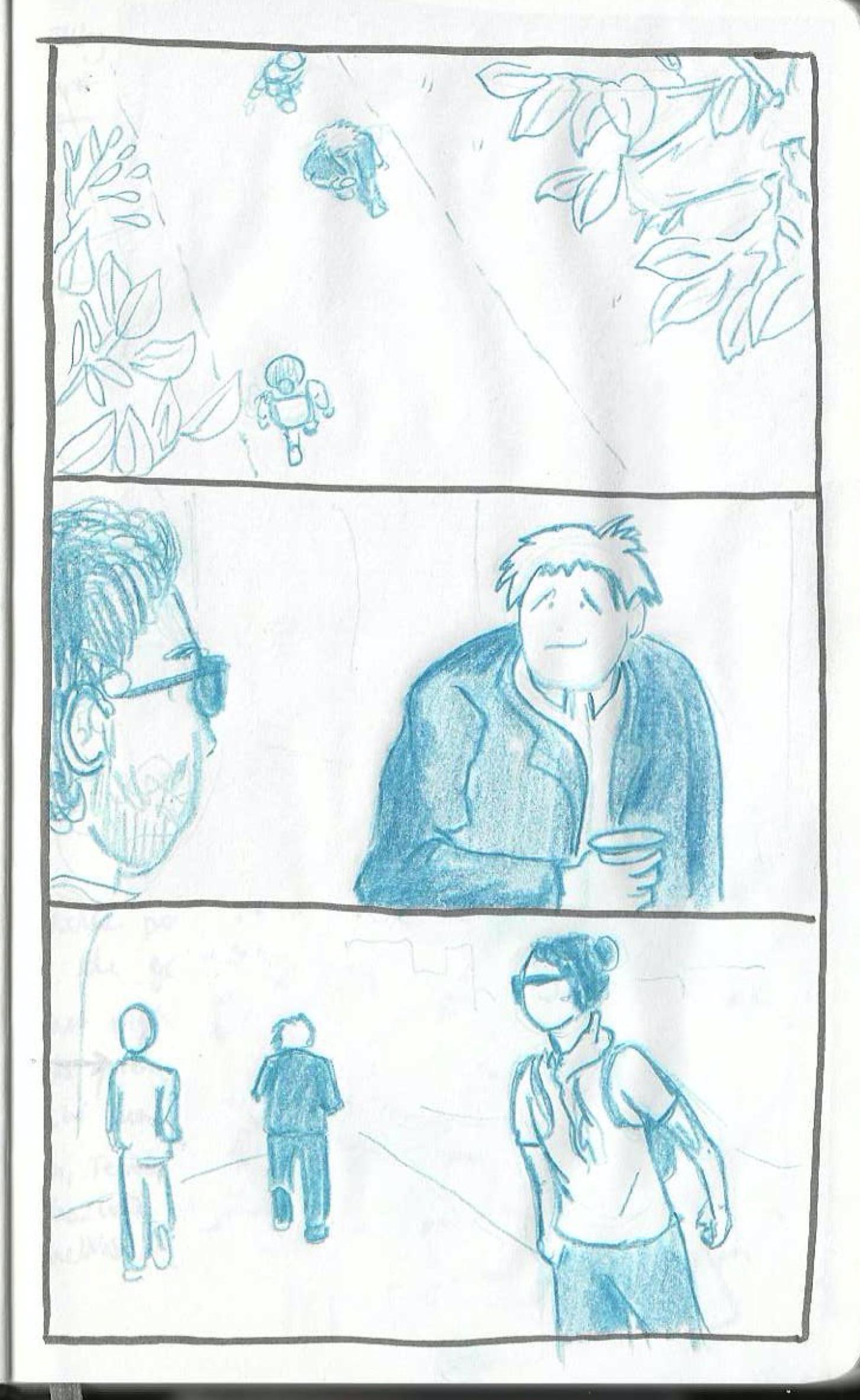