Here are some recent pages of my current sketchbook where I have been practicing drawing hands.

Some of them look okay, but there are really bad ones too, hands that resemble cocktail sausages stuck to a pineapple.

Meanwhile, at some point during lockdown, I started working on my french again after a long hiatus. I spend about thirty minutes a day practicing.

And then I started entertaining myself noodling away on piano (not even a real piano, just Garageband on my iPad!); but I know lots of chords and find quiet pleasure in learning to play songs I like.

In all three endeavours I am a novice, a beginner, an amateur. None of these activities are deserving of public consumption. I make howling mistakes at least 50 percent of the time.

And all three give me immense satisfaction. 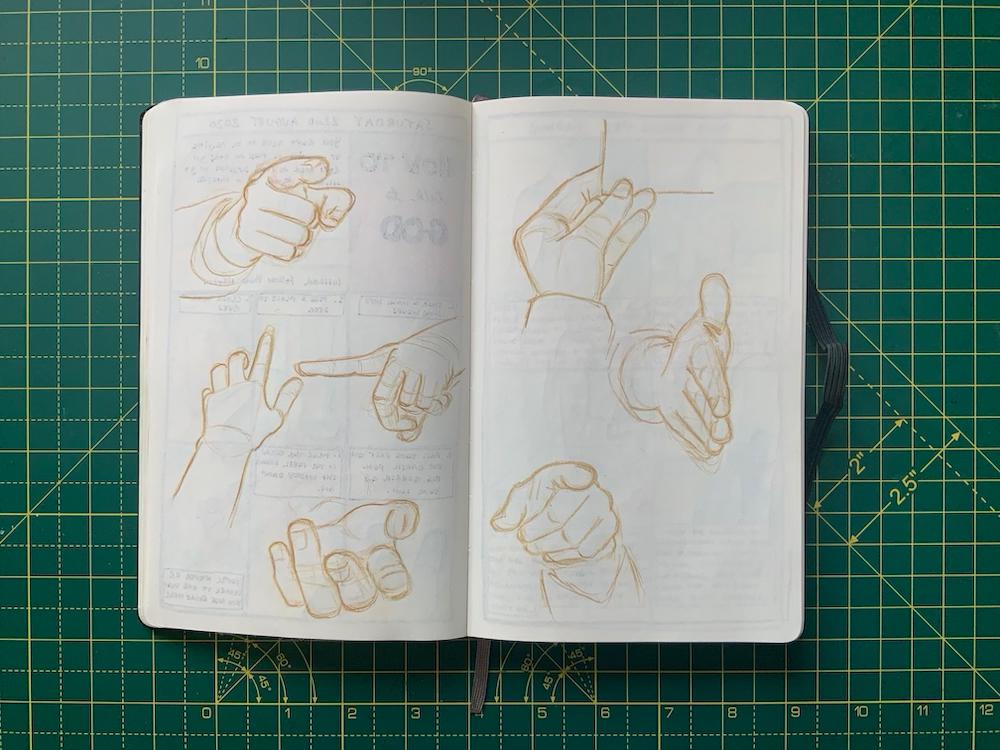 After a long time obsessing over perfection, mastery, professionalism, I think I am finally learning to be a beginner.

I’m gaining the ability to tolerate discomfort (it sucks to draw a crap hand); the humility to accept my ignorance but conversely the confidence to believe I’ll one day be really good at these things, as long as I keep going.

The actor and musician Josh Radnor (who first played a guitar at the age of 43!) put it nicely in a letter last month titled “Grace of the Beginner”:

“Much of early life seems to be about isolating our strengths and leaning into them. It’s increasingly difficult as we get older to voluntarily become a novice again. The ego simply doesn’t like to be humbled. But there’s also a kind of grace in being a mistake-prone beginner.”

I’m reminded of a great little story in Elizabeth Gilbert’s Big Magic where she meets a 90-year-old woman called Winifred who, at the age of 80, had become obsessed with ancient Mesopotamia and took it upon herself to learn all about it.

“She had gone to the Middle East on several archeological digs; she had learned cuniform script; she was friendly with the greatest curators and scholars on the subject; she had never missed a related museum exhibit or lecture when it came to town.”

Part of me quietly hopes that when I’m 80 I’ll be a published artist, fluent in at least two languages and maybe even rocking out in a band; I’ll have a pilot’s licence and a screenplay or two.

And that’s when I’ll pick up Taekwondo. 🤷‍♂️

From beginners to bonafide gold medalists: the New York Times published a new video I directed this week!

Gwen Berry is a remarkable US Olympian who, following in the footsteps of John Carlos and Tommie Smith, raised her fist on the podium at the Pan-Am Games last summer. She was punished by the IOC under an archaic rule that bans athletes from making political statements.

The IOC wants sport to be politically neutral — but in the time of George Floyd, Breonna Taylor, Ahmaud Arbery, Jacob Blake and so many others, punishing a black woman for protesting racism is, well, dumb, right?

Gwen is a star in the making and I’m proud to have helped share her story.